I throw on the lights, all of us still snoring from the long day before. Eventually filing out of the apartment, we make our way down to Calle Obispo for a quick brunch. (Oh, how naive!) We choose a nice outdoor cafe with tropical trees hanging over, offering shade in the heat. The salsa and bachata music really draws us in.

As soon as we sit down, the music changes to 2000’s hiphop and R&B. I wonder if it’s so obvious we’re American. One of the guys wearing a basketball jersey and snapback, backwards.

We soon realize that there’s no such thing as a “quick” meal in Havana, at least not on Calle Obispo. Of all the twenty tables, no one had food on it. Even our drinks took a long time to come out. We were so thirsty and excited to do stuff, so Zaida and Royce went to check out the Cell Phone store across the street. They were still looking for SIM cards for their phone.

Once again, we express our concern for our missing teammate. There’s still no word from Emily…

Zaida and Royce don’t return with SIM cards, but they return with five hollowed out pineapples with piña colada inside. Happy!!! 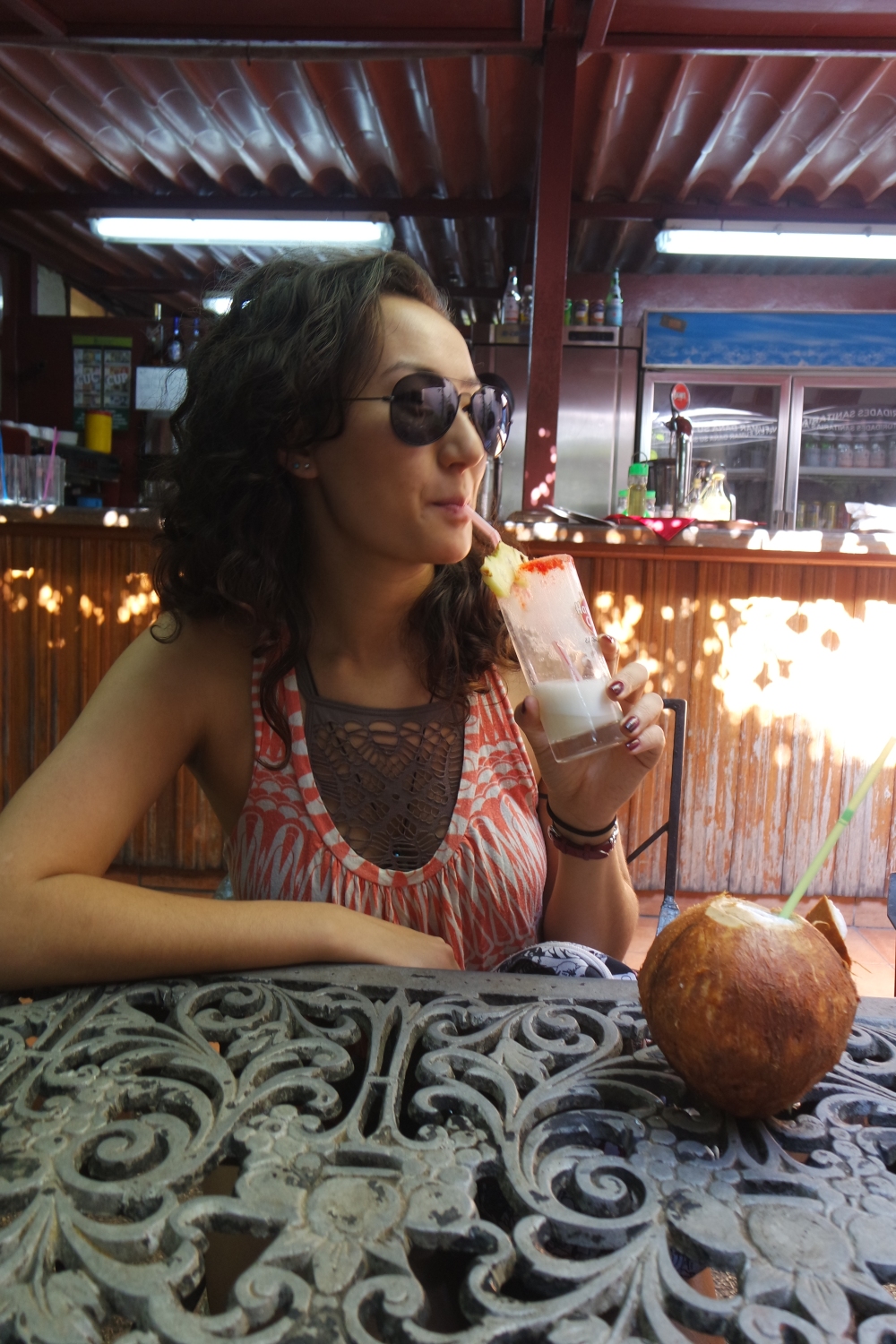 The servers don’t seem too happy that we brought other drinks to the table, but there’s not much we can do at this point but drink them as fast as we can. Well, mine’s already gone. Finally, our food comes. Everyone is semi-satisfied. This is probably the best vegetarian meal Shakun gets to eat in Cuba; consisting of an onion omelette with rice on the side.

We rush out of there to make it to our lesson set up with Yohan at 2pm. We might have just enough time to walk, 30 minutes. Just as it’s turning 1:50pm, I turn around and tell the gang, we need to grab a taxi because we’re not going to make it on time, otherwise.  Zaida waves down a taxi, and as fresh new tourists, agree to pay 25 CUC for a few minute ride.

Hey, it was the going rate. We weren’t going to get a better offer.

So we arrive at 2:00pm exactly. I lead the group up a questionably thin, shaky spiral staircase, and three floors up, we arrive at a salsa class.

Yohan provides an experienced dance partner for each of us, so two new dancers aren’t struggling to learn together. This quickens our learning pace and we all are paired with a Cuban dancer! The hour wizzes by. They remain a highlight of the trip.

As we’re getting ready to go, Royce says his glasses are missing. We looked everywhere.Did someone steal them? There was a class right before us. Yohan says that’s never happened before.

He remembers taking them off right before practice. Shakun doesn’t remember him ever having them on. I check the pictures, he has only sunglasses on in the pictures.  I think I see them at the bottom of a hole, three stories down. They run to look. Looks like (no pun intended) Royce won’t be able to see fully for the rest of our trip in Cuba.

I ask and Yohan says there is a place to get prescribed glasses, affordably. BUT, he says, which at this point is very clear to me, ONLY ZAIDA SPEAKS (in Spanish), and no one else say a word (in English). If you have issues, he says, come get me and I will go with you.

He gives us detailed directions of the shop’s location. The rest of us need to move out luggage out of Lumei’s apartment. We thank him and rush down the dark spiral staircase to the street.

We’re parched from dancing in the heat and stop at a corner window vendor. As we’re waiting in line, three people come up and slip between me and the person in front of me. I had left the typical (American) distance of about two feet. I was the only one in line at the time, and the sidewalk was empty. I thought these few people were just impatient, but then it happened again a minute later. So when five little kids came running up to the window, I was on the person’s butt in front of me. We were PARCHED, I’m not kidding.

Eventually, I order “el jugo de melon” for 50 CUP. I’m not sure how much that is and hand over a small bill. They give me basically everything back, it cost 50 cents. And it’s the best melon juice I’ve ever had.

“THE TAXI IS HERE!” Zaida runs around the corner, waving us down.

I chug half and then Ralyn chugs the other half.

We reach Lumei’s apartment to find her cleaning and she welcomes us home like family. She offers for her husband to drive us to our next place for half the price we would find on the streets: 10 CUC.

While we’re waiting, we grab pizza from across the street. 4 CUC. I’m always one to try new things, so I ordered the salmon pizza. It’s a whole pizza! And it’s raw, smoked salmon. I WOULD RECOMMEND TO NEVER ORDER THIS. I was very sad. And there’s not many times I don’t like food. This was one of the times where my body really needed sustenance and it just didn’t do. Shakun and Royce were kind to share theirs with me.

He arrives in a classic red 1950’s (Ford?) car. All I know, is that it was in supreme condition and beautiful. I chitchat with him all that I can in Spanish and learn that he’s a professor at the University of Havana. He taxis in his free time like many other taxi drivers.

Like always, the driver asks people who are walking on the sidewalks, or the center of the roads, for the location of the cross streets. As we’re pulling up, we see a familiar face.

Emily is standing out in front.

That evening, she tells us all about her journey around Cuba.

Zaida, Royce and Ralyn head to a house they’ve rented some fifteen minutes way. The three of us left at Ilda’s house, Shakun, Emily and I, almost take a nap, but end up talking until the late evening while we wait for the others to return.

We head out later than planned, and as soon as we step out the Airbnb/Casa Particulares door, a man in a cut-off tank approaches us, asking if we’re looking for a taxi (in Spanish). Zaida talks with him. A couple of us shuffle our feet and someone (probably Emily) says we’re really close to a busy road and we can find a taxi ourselves. None of us are convinced since we don’t know the area and it’s 10:30pm and pitch black everywhere.

After some ten minutes, half our group wants to go with this man to have him find us a taxi and the other half want to get a taxi on their own.

We want to know what’s the catch.

Ultimately, our leader is the fluent Spanish speaker and we end up having this man get us a taxi. He says La Discoteca that we want to go to might be closed, he doesn’t know. But he does know of a place that is open with really good music–La Buena Vista Social Club. Again, some of us still want to check out La Discoteca, and some want to go to this place he’s talking about.

This is the beauty of travelling in big groups. There’s a lot of room for many different opinions, and collaboration, if we’re lucky.

This is the first large group deliberation this trip. And oh, how many more there’ll be!!

Now that we’ve accumulated Emily, there’s six of us. Royce and Zaida repeat that separating is not an option. So the man brings an extra long car to seat nine, I believe, because he comes with us. But the taxi costs 10 CUC. That’s not a bad deal.

We arrive to La Buena Vista Social Club. Very happy and sweaty people are walking down the wooden staircase. Emily is very excited, her mother listens to them all the time!

At the top of the stairs, our now tour guide/taxi finder man turns us around and tells us the club is closing. It’s now 11:30pm and chances on finding any where to dance are dwindling rapidly.

We’re able to walk to Calle Obispo from La Buena Vista Social Club. Royce tips the man and he parts ways. The consensus is that we still don’t know whether we were scammed for sure, but I’m pretty sure because an extra 1 CUC is a huge deal. The average monthly salary for locals is 20 CUC. Any job in tourism will make them bank.

So we’re back at Calle Obispo. Everything’s closed or closing. There’s one bar still with live music inside. They don’t want to dance in a restaurant, but everyone’s getting very frustrated with the situation. Everyone just wanted to dance and now it’s 11:45pm and it looks like we just taxied around town for nothing.

The music is loud from the street and I suggest that we dance to it, in the street. They laugh a bit and I tell them, “Why not?? We’re in Cuba!” And these goons are quite easily convinced after that. No joke, the empty street is soon full of a crowd watching us three couples dancing salsa on the cobbled stones. The Cafe Paris had a ton of outdoor seating, and now all those people had entertainment. Other people began to dance, too. People were recording on their phones. It was awesome.

I was happy. After a handful of songs, we all were. But we still wanted more. It was 12am now. We rest for Ralyn’s feet outside of a closed bar where two workers are hanging out.

When we asked, they said the only place open was a restaurant called Kilometer Cero (Km 0) until 6am. I approached some men who had been hollering at us a minute before, asking if we wanted a taxi. In as stern as I could in my poor Spanish, I asked how much. Me, the learning negotiator, trying to look fierce. He said 6 CUC.

“Por todos, seis.” I  confirm the total for all of us, again in a strict tone. I don’t act surprised that the price is unusually low for all of us. (A few of us make that mistake during the trip, and the prices mysteriously triple/quadruple/quintuple. “Only dos!” “No, no, diez.” He asks if we want to take his ride and I tell him I have to double check with the team.

We go to Kilometer Cero and have a great time. We get drinks, which were way overdue. Mojitos, Sunrise somethings, daiquiris, shots, beers, you name it. In my opinion, this restaurant also had the best food all trip. At 2:30am, we headed home, happy and full.

It was a great day. We had our group salsa lesson, made it to our next casa, found Emily, danced in the streets and had a good, hot meal. Oh, and Royce found his glasses in his shoe!